Last weekend, my Fuse Multisport Racing Team teammate Sarah Short, our coach Steve O’Brien and me, made the 7-hour trip to Port Lincoln in the Fuse Mobile for a very solid weekend of racing and training. The race elements included a 1.1 km swimming event on Saturday and the Tunarama Triathlon on Sunday. Coach had planned to exploit the weekend as a mini-training block for us to focus primarily on race skills, travel experience and recovery methods – so we had a stack of training sessions to complete in addition to the race elements, which started pretty much as soon as we arrived at our accommodation in Tumby Bay, with an open water training session.

On Saturday, we kicked the racing off with the 1.1 km swim, which was held in Boston Bay. When we arrived, the conditions were perfect – with smooth sea conditions. As swimming is one of my strengths, in this event my objective was to challenge myself, and to stick with the lead swimmers. After a deep water start, I was able to maintain close proximity to the lead swimmers throughout the majority of the event and settle into third position on the feet of the lead female swimmer, local gun-swimmer Brooke Traeger. With approximately 250 meters to go, I made a move to attempt to overtake Brooke, but veered slightly too far off the race line, which was enough to create a gap between us. This gap was enough for Brooke to exit the water first and take the win by 5 seconds. Overall, I was pleased with the intensity and outcome of the race. Sarah also swum an impressive race, finishing in the top 5 females. 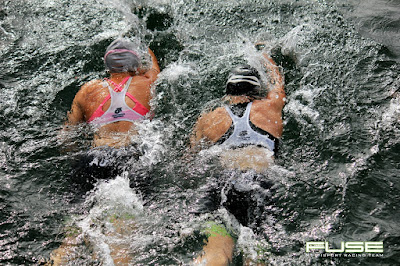 Immediately after following the swim, Coach had us complete an 80 km-training ride which included a hill element followed by a chase down 36 km TT for me and a 32km TT for Sarah, while Coach followed us in Fuse Mobile and provided time gaps. The challenging course, and perfect road and traffic conditions, made for an excellent training environment to execute the TT – and the local drivers were very relaxed and friendly. I felt quite strong throughout the TT, and the difficult task of chasing down Sarah provided a real incentive to stay in the zone. After closing the time gap relatively quickly in the initial 24 km I finally had Sarah in sight, but it still took another few kilometers to close the gap to about 100 meters – which was maintained for some time. For the remainder of the TT, I managed to overtake Sarah but was unable to create a significant lead and we both finished strongly less than a minute apart in our longest ITT to date. 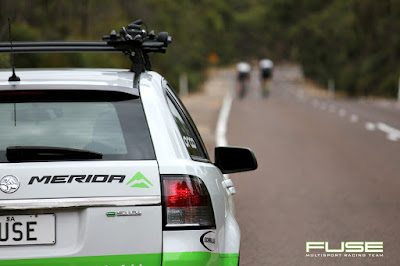 For the rest of Saturday, we incorporated some recovery activities and then settled into watching movies, resting, and refueling. We then completed a late afternoon Fartlek set followed by wading in the lovely beaches of Tumby Bay to get our bodies loosened up for Sunday’s activities.

On Sunday, we completed the Tunarama Triathlon which consisted of 3 repeats of a 250 m swim, a 6.6km ride and a 2 km run. I was excited and a little nervous to start. My objective for this event was to maintain focus throughout and hold intensity in the swim and bike leg, to hold a run pace which we had been rehearsing in training to ensure I was ready to complete the circuit another two times, and to consume an SiS Go Gel on the second 2 km run leg.

Feeling good after the first swim and bike leg, I went out a lot faster than we had planned in the first run leg, which in hindsight probably made it hard for me to sustain the pace we were looking for in the final two runs, but which meant that I had a good lead at the end of the first circuit. Even though I had a good lead, I was aware that both Sarah and a fellow competitor Sam Boag had outstanding runs and I was determined to try to hold them off for the remainder of the race. During the second run leg, I was overtaken by Sam and had to rely on my final swim to try to retake the lead and create a sufficient gap between us - and then attempt to maintain that on the final bike leg. However, coming into our final transition with less than 10 seconds separating us, I wasn’t able to create the gap I needed, and started the final run with Sam hot on my heals. My objective was then to maintain my own run form and focus to the finish – and throw everything at holding Sam. However, Sam was flying on the run, and I finished in second place behind her by less than 40 seconds. Sarah was a close third behind after also completing an outstanding race. Immediately after the race, we completed a steady 5 km run as recovery. 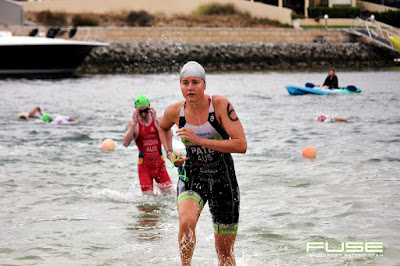 On Monday, we completed a short recovery spin on the bikes on an amazing stretch of road from Tumby Bay to Cummins and then made the return trip to Adelaide, with plenty of time to catch up on some sleep and debate who had made the best movie selections over the weekend.

All in all, the weekend was an awesome racing and training experience which will help me prepare for the interstate races in my schedule later this season.

Thanks to my teammate Sarah for accompanying me, and also to our team’s partners – Merida Bikes, Brooks Running Australia, Champion System Australia, The Glasshouse, Science in Sport, and Madderns Patent and Trade Mark Attorneys.
Newer Post Older Post Home