ADELAIDE, January 2016 – Australia’s Fuse Multisport® Racing Team is delighted to announce that leading tyre manufacturer SCHWALBE will be the team's exclusive tyre provider for 2016. Under the partnership, FUSE MULTISPORT athletes will race and train on SCHWALBE tyres exclusively, including the SCHWALBE ONE high performance racing tyre.

SCHWALBE's partnership with Fuse Multisport® Racing Team represents a substantial commitment to triathlon by SCHWALBE. Fuse Multisport® proprietor, Stephen O'Brien said "after doing extensive ground work to select a race tyre for the 2015 World Duathlon Championships here in Adelaide last year, we selected the SCHWALBE One, and it has proven to be a stand out racing tyre with exceptionally low rolling resistance". "We are excited to have such a major force in high performance tyres supporting our team." 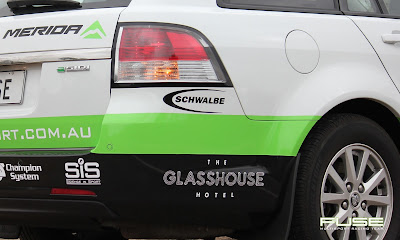 SCHWALBE, with world headquarters in Reichshof-Wehnrath, Germany, is one of the foremost bicycle tyres company in the world. At SCHWALBE, designers study every conceivable aspect of performance to develop tyres that perform at the absolute peak of performance in their specific application. The SCHWALBE One racing tyre is the fastest and most reliable competition SCHWALBE have ever produced. Available as a folding tyre, tubular tyre and in a tubeless version, the SCHWALBE ONE is the racing tyre which has been used by world tour teams, including AG2R amd IAM Cycling

Based in Adelaide, South Australia, Fuse Multisport® is a multisport team with a track record of success at multisport and cycling competitions, including at World and National Championship events. Founded in 2011, the team’s 2015/2016 roster includes Word U19 ITU Duathlon Junior Bronze medallist Daniel Canala, and emerging U23 triathletes Sarah Short and Amber Pate. Led by the team’s coach, Stephen O’Brien, the team’s mission is to become Australia’s leading multisport team.

This year, the team’s athletes will attend World Championship events in Europe and Oceania.

Goals for the team in 2016, after three World Championship podiums in 2015, will be winning individual National and State Championships, and a podium result in the ITU World Duathlon Championship in Spain in June.