ADELAIDE, January 2016 – Australia’s Fuse Multisport® Racing Team is excited to announce that tour stage winning bicycle brand MERIDA has signed an agreement to be the team’s exclusive bike provider for 2016. Under the agreement, FUSE MULTISPORT’s high performance multisport athletes will be equipped with the Warp Tri 5000, Scultura 6000 and Reacto 5000, in FUSE MULTISPORT® team colours, for training and competition at national and international multisport events.

“We are excited to partner with MERIDA, and have our high performance athletes riding the same bikes as the riders of TEAM LAMPRE-MERIDA,” said Stephen O’Brien, proprietor of Fuse Multisport. “Knowing that our bikes are the same pedigree as those ridden by world champions and stage winning tour professionals will give our athletes an extra edge at their major national and international races”.

With 25 years of experience in developing world-class bicycles, MERIDA sets the standard in high performance bicycles. Ongoing testing and development, and consultation with high performance teams such as TEAM LAMPRE-MERIDA and FUSE MULTISPORT®, is integral to MERIDA’s approach and tour stage winning success. 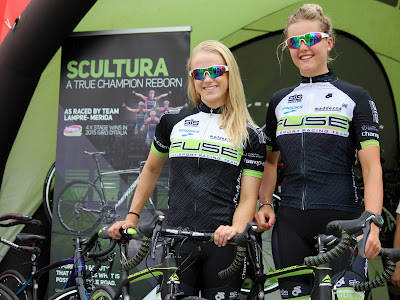 MERIDA stands for bicycles “Designed and Engineered in Germany, Made in Taiwan“ – and thus for the close interlocking of world-class technological know-how, premium manufacturing competence and the dedication of countless staff members all over the planet. MERIDA is able to satisfy demanding bikers with everything imaginable – models for children, e-bikes or high-end time trial machines like the WARP TT. MERIDA lives up to its ultimate athletic ambition every year by helping high performance athletes, like the triathletes of the FUSE MULTISPORT RACING TEAM, with top-level “working tools” to score high athletic honours regularly.

MERIDA has spent hundreds of hours in the wind tunnel in order to design every fraction of a square inch of the new WARP TT as aerodynamically advanced as possible. And this effort paid off: Thanks to the “fastback“ aero profiles with their pronounced cut-away on the backside, the progressive layout of both the frame and the fork and a cockpit that has been fully integrated into the entire design concept, the result is a minimal aerodynamic drag that puts the WARP TT in the select group of the best time trial machines available at the moment right from the start.

Based in Adelaide, South Australia, Fuse Multisport® is a multisport team with a track record of success at duathlon, triathlon and cycling competitions, including at World and National Championship events. Founded in 2011, the team’s 2015/2016 roster includes Word U19 ITU Duathlon Junior Bronze medallist Daniel Canala, and emerging U23 triathletes Sarah Short and Amber Pate. Led by the team’s coach, Stephen O’Brien, the team’s mission is to become Australia’s leading multisport team.

This year, the team’s athletes will attend World Championship events in Europe and Oceania.

Goals for the team in 2016, after three World Championship podiums in 2015, will be winning individual National and State Championships, and a podium result in the ITU World Duathlon Championship in Spain in June.