First things first, USM events put on a fantastic race in Mooloolaba. The whole town thrives, getting right behind the event which creates a surreal atmosphere for the racing across the weekend. It was a great opportunity to have a crack at competing in the open field for the very first time! Here is how things eventuated.

Steve (coach) and I arrived in Mooloolaba late on Friday. Saturday was pretty laid back with a quick swim session in the river - since the swim had been shifted from the ocean swim, and then registering for Sunday's race.  Was great to meet former SA pro Sarah Crowley who is combining training and working hard!

Sunday morning was an 4:25am wake up and then down to the start for the usual warm up routine.

With all the hype of seeing the Continental Cup races shoot off at 6:30am, I was pumped to get away at the early time of 6:45am. With the calm and warm water that the river gave us, the swim was fast and furious. I got a great start and was at the pointy end of the field for the first 200-300m. However, I just missed getting on to the feet of some faster swimmers and subsequently fell off the back of the first pack. After settling in comfortably in the second pack I exited the water in around 21:30 with a few heavy hitters in Melzer and Hooper right on my heals. 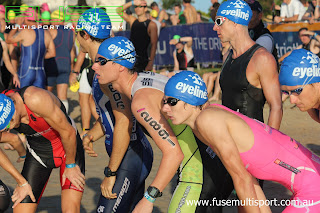 A long 400m run to transition and it was onto the bike where I really wanted to put the hammer down. After working hard on the rolling hills out to the freeway it was time to open the gas and let the legs do the talking! Flat, smooth and no wind made the perfect recipe for a very fast bike. But it also made it hard to break away from rivals. After working with a few guys in the pack, we turned at the half-way point around 1 minute down on the first pack and hungry to bridge the gap. I put in a little surge for several minutes after the turn in hope to drop the group, but after a short effort quickly worked out that I wasn't making progress so I re-joined the group and decided to let some of the other boys do some work at the front. I contributed a lot to the pace work on the way bike to T2, trying to hurt the legs on the runners in the group. We entered T2 approximately 45 seconds down on the first group, with a solid bike split of 58:30. Time to hit the run. 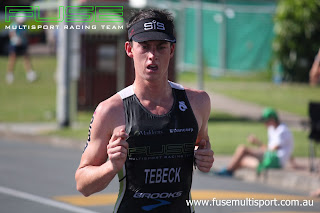 Unfortunately, I didn't hit full stride on the run, and I found myself struggling to hold on to the athletes I came off the bike with. This wasn’t surprising as I came into the race with minimal run preparation. I tried to exert myself but my legs just were not there on the day and I ended up dropping a few positions on the run. I ended up coming through in a time of 2 hours and 6 minutes, which was a little slower than we had planned, but highlights the areas which I must work on. It was great to see Grant Melzer have a blinder of a race in his distinctive Champion System kit.

So I walk away from the race with many positives, I know my bike performance is where it needs to be, but there are many areas which we can improve on. Plus, watching the Male and Female Elite races was a great experience and seeing athletes like Gomez, Emma Moffatt and Peter Kerr in action put things into perspective and shows how high the bar is at the highest level. This gives me lots of motivation to train to improve and is something that I will embrace in the coming months.

This race, along with many others throughout the year, would not have been possible without the support from the team’s sponsors, my family, friends, team, and coach. Science in Sport produce a product that I feel is the best in the business. The electrolyte GO gels have ‘saved my ass’ on many occasions when I was running low, can’t speak highly enough of their products, thank you very much for the support. Champion System provide the team with fantastic training and racing gear that keeps us cool, light and fast in all situations, without this my performance would be nowhere near as high, thankyou guys! The team is also extremely lucky to have Brooks on board and I couldn't be without their running shoes and training attire. If anyone is keen on a new pair of shoes be sure to check out the new Pure range!  I'd also like to thank Craig Fountain at Saunders Sports and Spinal - who is practically the Fuse Multisport team physio, Dancorp Serviced Offices for access to their fantastic electronic billboard on Sir Donald Bradman Drive, and Madderns Patent and Trade Mark Attorneys - the experts in all things patent and trade marks related, for their tremendous support of the Fuse Multisport Racing Team. We are pretty fortunate at Fuse to have some of the best in their business on board!

Next is my family who continuously give up their time and resources to help me fulfil all my training and racing commitments. A special mention to my girlfriend who has to put up with a triathlete as a boyfriend! Finally to Steve O’Brien who is a superb coach and someone who I am excited to keep working with for now and well into the future. Thank you for all of your sacrifices and hard work Steve.