May 19, 2012, South Australia: 22 year old triathlete Ella Holmes, of Evanston Park, was crowned South Australia’s best female triathlete of 2012 at Triathlon South Australia’s annual award ceremony tonight. The award capped off an outstanding return to competition for Ella after an 18 months absence from the sport to complete university commitments.


Ella said that she was ecstatic to win the award and was looking forward to further success in season 2012/13. "Qualifying for the Australian team to race in the World Championships in New Zealand in October was one of our objectives this season, and we achieved that", she said, “I’m pretty excited to have the opportunity to represent Australia again”.  The 2012 World Championship event will be Ella’s second appearance at a World Championships after winning the 2009 World AG Championship in the U19 age-group category. 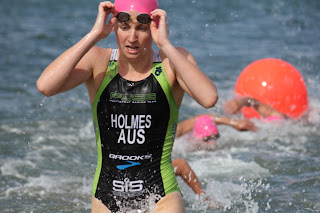 Ella and fellow Fuse Multisport Racing Team athletes Sam Tebeck and Ben Tripodi, who have also qualified for the Australian team, are now undertaking a hectic preparation schedule for the World Championships event.  Coach Steve O’Brien said that the next few months would be defining months for the team.  “June and July are the biggest training months for the team in terms of volume”, he said. “Ella will cover up to 30km in the pool, 280km on the bike, and 50km of run training each week. “They are impressive numbers”, he said, “and she needs to manage that around her work commitments”.


Ella is proving to be quite a match for the boys during the team’s daily training sessions.  “It’s good to train with the boys”, Ella said, “it gets pretty competitive”.